When we moved in to our house years ago, we already had an in-sink water filtration system. Ours also had a hot water tank installed so we could have both hot and cold filtered drinking water.

In 2018, one of the levers (the hot water lever) broke and water would not stop flowing. Unfortunately, the unit itself is sealed so there was no way to repair the faucet. 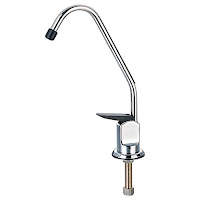 We took a look at the plumbing under the sink and sighed at the complex piping and tubing going to and front the faucet, the water supply, in and around the hot water tank.

Also, as I was trying to look for dual-lever faucets, I was surprised to see replacement costs going upwards of $350.

As a quick fix, we decided to just get a cheap, $10 single-lever faucet. Hubby sorted out the maze of pipes and tubes under the sink, relocated the filter to a place where it would be much easier to replace, disconnected the hot water tank (temporarily) and connected the faucet.

I would eventually be able to find a replacement dual-lever drinking water faucet at a more affordable price but by then, we were already comfortable with just the cold water dispenser so the "temporary" solution stayed in place for 1.5 years ... until this morning when the lever broke off.

Thankfully, a few things were going for us.

2) While I'd already forgotten whether or not we have the right quick-connectors for the tubes,... they conveniently turned up when hubby opened a kitchen drawer.

So now, we have this baby in the kitchen.

It's technically half-installed as of today, as the only the cold-water connection has been put together. We hope to get to the rest in the next few days.
Posted by popcorn at 9:41 PM No comments:
Labels: b-hill, DIY
Newer Posts Older Posts Home
Subscribe to: Posts (Atom)