On Pinoy seryes and movies

So I had a chance to take a breather recently and found a pinoy teleserye on Amazon Prime and I started watching "Karibal Ko Asawa Ko" In a nutshell, it's a story about Nathan, a closet-gay, knocked a girl up and got married. He wasn't happy with the marriage, he later started cross-dressing, liked it. He faked his own death and the death of their daughter and ran away to have sexual-reassignment surgery and changed his entire appearance. He became a transgender woman, Venus. Venus would get involved with a guy named Gavin who is unaware of his real personal, break up, Gavin meets and falls in love with Nathan's ex-wife, Rachel. And Venus/Nathan tries to get Gavin back.

What really enticed me to watch was my curiosity in how they were going to accomplish the "transformation into a woman" part. Obviously, they'd be switching actors, and you can explain away the differences by saying he had extensive surgery but one thing you can't change is height. The transgender woman, Venus, should appear as tall as the person who played Nathan. The actor playing Nathan, aside from being tall, was also muscular so I really wanted to know how they were going to spin this.

I found myself engrossed with all 114 episodes - alternating between feeling aghast at Venus' propensity for evil and heckling the production staff for all the inconsistencies.

These are the things that I noticed, in no particular order:

1) Nathan was tall and his post-transformation character, Venus, looked tall too which is good, but why would the show,  every now and then, deliberately show a closeup of her feet walking in platform stilettos (pa-suspense effect), edi nabuko na that she's not really that tall.

2) Home fixtures - at some point, the characters were supposed to be living in the Los Angeles and they were shooting INSIDE an LA home. Bakit yung light switch mukhang Pilipinas na light switch ?

3) The timeline for the transformation from man to woman was unrealistic. Nathan left for LA when his daughter was about 1. they didn't say how long the transformation took but at some point, he became Venus, met Gavin and they lived together for 5 years. They broke up, Gavin went back to the Philippines and some time later, they were celebrating Nathan/Venus' daughter's 7th birthday.

So if we backtrack a bit... if Gavin lived with Venus for 5 years, that means he met Venus just before the child turned 2. If Nathan left for LA when the child was 1, he became a full woman in 1 year ?

4) The surgeon they talked to for Nathan's transformation described the extensive procedures and what they were doing in Spanish. When the doctor paused, nathan and companion looked at each other and companion said "are you sure about this ? This is a totally new person na" (or something along those lines)... and my thought was, "teka, naintindihan nila yun ? walang translator ?" 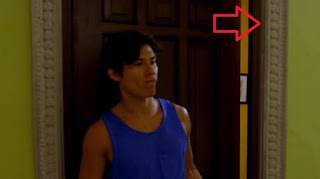 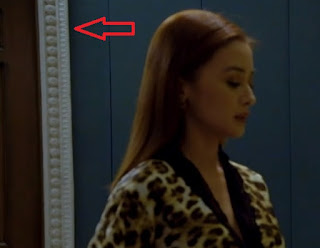 I get that they used the same house for different locations but perhaps next time, they should look for houses with less-distinctive features.

After this, I wasn't sleepy yet so I started watching different episodes of Mano Po and I was flinching the whole time.

2) A lot of the characters wear CheongSams and Changpaos. Ours must not be a typical Tsinoy family because the only one I recall seeeing in a cheongsam was my Ama and it was a huge portrait of her and my Angkong. I have never seen - EVER - any of my male relatives in either the Philippines, China or HK wear a Changpao.

3) the way the elders speak in forced Chinese-accented tagalog. Annoying and a tad bit insulting.

4) And when the actors are try to speak their Hokkien ? hurts my ears.

5) And why do these people walk around in their homes in shoes ? Again, ours must not be a typical Tsinoy family because we walk around in comfy slippers at home. Shoes are removed at the door and we change into slippers.

Posted by popcorn at 1:12 PM No comments: 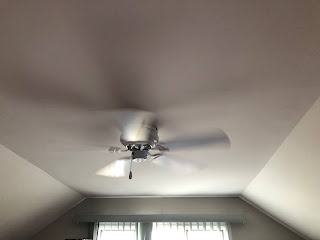 <-- Before - we just had a ceiling fan, no lights. The switch that controls this fan is also in the middle of the room, far from the door/entrance.

This was a bit more ambitious because we also wanted to either have the switch transferred to the entrance area (if we were hiring a professional electrician) and/or have a remote control installed.

Since we decided to DIY, a remote control would have to do. It also works out well because we can always install the remote control holder near the door. 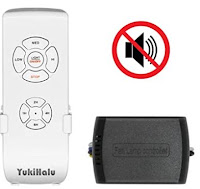 For this, we purchased a Harbor Breeze 4-light Incandescent light kit for $33 - they also sell a 4 light LED light kit for the same price, we decided to go with the incandescent kit because of the higher wattage capacity (you can always install lower-watt bulbs) and a Yukihalu remote control kit.

The Yukihalu remote controls both the fan and the light, got this for $18 at Amazon. Per the product description, they have the smallest remote module in the market, other brands' modules are much bigger (harder to fit in the fan housing). 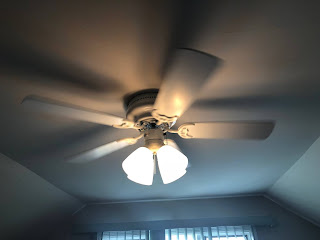 This was a super simple project, electrically-speaking (is this a proper term?) as everything was neatly labeled. The hardest part was attaching the remote module and getting everything attached to the wires and getting it out of the way of the main fan. We eventually had to attach this outside of the housing because there was no way for it to fit inside.

This isn't fully finished yet as it currently is using the 60 watt incandescent bulbs included in the kit. We've ordered 60 watt equivalent daylight bulbs from Amazon ($15 for two 3-packs).

Posted by popcorn at 5:05 PM No comments:
Labels: b-hill, DIY 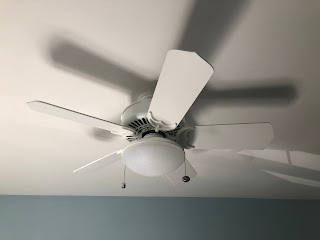 So far as DIY projects go, this weekend has been a very productive weekend for us.

This week, we decided to tackle ceiling fan lights and what triggered this DIY frenzy was that when we set up Swe-cha's study area downstairs and moved our torchlight beside his table, it left the blue room dark. Blue room is where the husband set up his home office, it does have an existing ceiling fan with a light, but the light is a single halogen bulb and it gives off a dim, yellow light.

I started looking for electricians and getting quotes for installing overhead lights (recessed lights, most probably) and found that it will cost between $500 - $700 to get them installed and this quote snowballed when I also concluded that since we were going to have someone come and do this, we might as well get lights installed in the 4th bedroom as well. 4th BR is a longer room and will probably require 6 lights and will cost another $800 - $900.

It took a while but I did find the Minka-Aire K9515-1 Universal 12 1/4" light kit with frosted white glass. This was a good fit for blue room because it had a low profile. It takes 3 candelabra bulbs (E12 base) and hubby quickly found 100w-equivalent daylight bulbs for it.

- two 2-pack Feit 100w equivalent daylight bulbs for $17 each. Yep, the bulbs almost cost as much as the light kit itself). 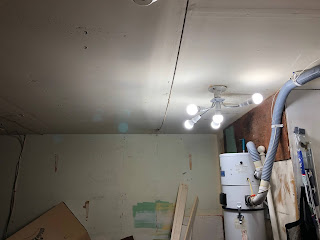 Also found this awesome fixture from Amazon for $8 - it attaches to a single bulb socket and allows you to attach 5 more bulbs. We installed this in our garage where we only have the 1 bulb in the ceiling and instantly, the place looks so much brighter.
Pictured is the new light fixture with five 60-watt equivalent daylight LED bulbs (just 8 watts each). Suddenly, it makes our garage so much brighter and I see how old & dingy-looking the garage is - we'll probably want to plan for a garage-related cleanup & remodeling project next spring.

Posted by popcorn at 4:27 PM No comments:
Labels: b-hill, DIY 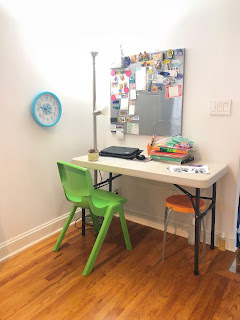 When Covid-19 came out last schoolyear and we stared doing remote-schooling in March 2020, we set up Swe-cha's laptop in a corner of the dining table. That worked because they met with the teacher 3x a week, no more than an hour each time.

When this schoolyear started, we initially stuck with the same set up but after a week, I knew it wasn't working. There were too many distractions because it was also where we ate and sometimes played games on tablets, phones and game consoles.

So last week, I ordered another work table for Daddy (a 6-ft folding table or a training table), we got it yesterday and set Daddy's workstation up on the new table. The 4-ft folding table he was using was then brought down to this corner where we set up a study area for Swe-cha.

I think this will also work out better because he has Physical Ed on some days and he will have enough space to exercise in front of the camera in this area.

Hope this works out!

Posted by popcorn at 9:33 AM No comments: 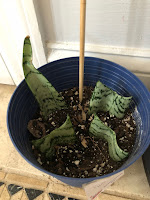 I must be lethal because I've killed a few of these "hard to kill" plants and the latest casualty is the plant whose photo I have posted here... or rather, what remains of it.
I was checking my plants and saw that this particular one had root rot - the root just melted in my hands, it was already hollow (seems like it rotted and then dried out) so I tried to salvage the 1 remaining leaf by cutting it up and then planting it in soil. Hopefully, these cuttings are still strong enough to propagate.
Posted by popcorn at 3:28 PM No comments:
Labels: DIY, Plantita 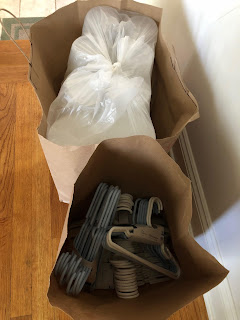 I can't believe how long it took me before jumping into cleaning mode.

Anyway, I joined a Freebie community for my city recently and got a chance to offer the large soup takeout containers. Surprise, surprise, there was a taker! That large bag in the photo is around 100 containers + lids. Finding someone who wants these containers has freed up my counter space - I actually see counters!

I also found a post looking for toddler hangers. I've been thinking about using adult hangers for Swe-cha's clothes but just haven't gotten to it. Seeing someone look for it propelled me into making the move so I can give these old hangers away. I was able to put away 50 hangers.

Posted by popcorn at 3:44 PM No comments:

and then he walks away, didn't ask for them anymore.

Posted by popcorn at 10:18 AM No comments:
Older Posts Home
Subscribe to: Posts (Atom)