It's Wednesday night and I'm starting to feel the crunch, there's only 2 days left before moving day and since neither one of us is taking a day off from work, we don't have much time left. I've been thinking about asking for a day off on Friday but I have such a huge backlog at work that I just couldn't push  myself to ask.... maybe when I get desperate enough.

Freecycle has been my best friend these past few weeks, taking stuff - which we loathed to throw away because it was such a waste - off our hands quickly. So far, we've given out a tv, a microwave, two CPUs, a microwave sterilizer, baby bottle warmer and a bunch of baby feeding bottles. Next on the list would be a set of car wheels, if we don't get any takers on Craigslist. Yes, we held on to these things because... well... we had the storage space and we could. It's also fortuitous that a group in my company held a collection for a homeless shelter and they specifically asked for toiletries, I checked with the organizers if they would take hotel shampoo/conditioner/soaps and they said YES so there went the little bars and bottles I've collected over the years.

We were unable to get rid of our old toys, we tried to drop them off at the nearby Salvation Army but they only accept unopened (brand-new) ones and used toys have to be brought over to the next city, if they accept it. It seemed a waste to throw them out because, after all, someone paid good money for these so we're holding on to them. Maybe we'd get more use out of them if we're blessed with another baby.

I've packed up most of my and Swe-cha's clothes - work clothes already hanging in the new house since last weekend and I took care of my house clothes today, leaving just enough to wear for 3 more days. I did pack up our towels and sheets as well.
Posted by popcorn at 9:48 PM No comments:

I just realized that the best way to get someone to confess is to be as vague as possible :)

Last week, hubby bought an ice cream cake for my birthday, we cut it up into serving sizes before freezing it so it would be easier to to eat. Swe-cha loved it so much that he would look for ice-cream-cake every single day. He ate the last piece last night.

Tonight, he kept looking for more ice cream and would make me help him rummage through our freezers (we have two). I kept pointing out that there were none left, he'd be okay but 10 minutes later, he'd pull me to the freezers to help him look again.

So I decided to call hubby.

There was a pause and he started asking... confessing, even. Is it the bathroom ? Did I leave it open ?

and he confessed to a few more things.

It wasn't until we started getting work estimates when we realized how expensive labor was and so it was that we hemmed and hawed about getting the paintwork done. Eventually, we decided to spend the money to get the living areas done for the following reasons:
- it's a huge area, definitely not something we could finish in a few days
- we can't close off any of these areas because of the house's open layout 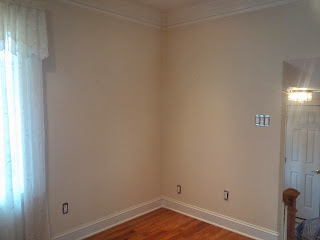 We contracted our fave guy, Jeff, to do the paint job for us. As we are repeat customers, he gave us a good deal. We gave him a deposit and lent him a set of keys to the house (we will have everything rekeyed after

While waiting for the space-suit guys to finish the cleanup last Sunday, we decided to give Jeff a head start and started taking out the electrical switch faceplates. This picture does not give what we did justice. In hindsight, I should've taken a picture of the long wall in the living room because it must have at least 5 outlets. Admittedly, we did this because despite his promises that he would take them off one by one, we were still skeptical. 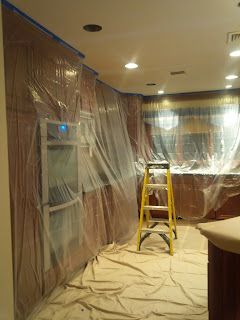 Jeff and son started prepping the house up for painting today. They would've done more if I hadn't asked them to sneak in another job (will do a separate post on that).

Yes, they did come through on their promise and taped up all the edges and pulled out all the receptacles on the recessed lighting. I don't have an exact count of how many recessed lights there are in the foyer and the kitchen-dining-living area but I wouldn't be surprised if the count reaches 20. Yes, there are a lot.

They said that tomorrow, they will start painting the ceilings and the wall. They have to come back on Saturday to clean up and put up all the fixtures again.

Posted by popcorn at 7:31 PM No comments:

So what's going on over here in the condo ? 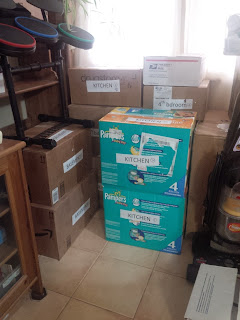 We've boxed up a lot of stuff - most are in our basement - but the ones we've boxed since October are just scattered around the house. Most are left in the general area of where it was sealed. We didn't mind at first since there was really nowhere to put them but we were fast running out of floor space so today, hubby cleared one corner of the house and we started stacking the boxes in that area.

The picture friend A posted of her Home Depot moving boxes comes to mind as I stare at ours. Apparently, she already has 2 people lined up for her boxes (to inherit them after she's done with her move). I wondered then why nobody was asking for my boxes after I'm done with them and this picture kinda answers why - who would want this bastardized collection of moving boxes saved up from online / webstore orders and diaper boxes ? They're not exactly photogenic... but hey, who cares ? Whatever saves me money :)

I also thought of printing out labels to clearly define where each box is supposed to go in the new house. So far, we have Basement, Kitchen, 4th bedroom and Garage.

Not really sure if we'll have time to label the ones in the basement but it shouldn't be difficult to say that all boxes that were previously stored in the condo's basement storage space automatically goes the new basement in the new house. 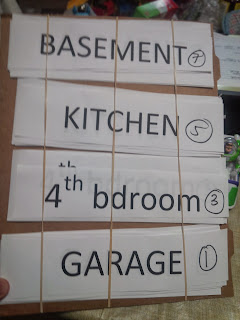 And to organize my labels, I improvised a clipboard out of a piece of cardboard and rubber bands. I numbered the labels so we can have a final box count of how many are supposed to go in each room. As you can see, we've designated 6 boxes for the basement, 4 for the kitchen and 2 for the 4th bedroom as of the time I snapped this picture.

Final box count for the day:

Basement - 10, these are boxes for long-term storage

4th Bedroom - 5, boxes with personal stuff currently in use such as clothes, shoes, books, toys

Garage - 0, boxes with stuff that will be used soon so these we have to unpack right away. 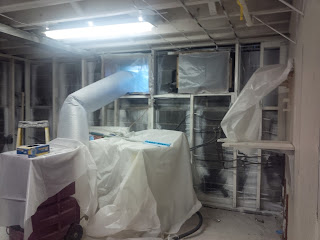 The guys in the spacesuits work fast.

We were told that they'd take 3-4 days but by the evening of day 2, the basement already looked like this.

That machine covered with plastic tarp with the tube running to the window is an air scrubber and was left running for 3 entire days, it's cleaning out the air inside the basement.

All the wood paneling are out. Thankfully, the mold situation wasn't bad and the framing on the walls (studs) were clean - in fact, they looked like new! No stains at all. Everything was treated with Microban and was sealed with mold-resistant paint that contains a mildewcide (Zinsser). 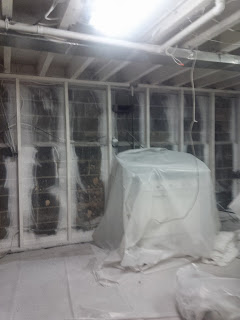 All the ceiling panels and kitchen cabinetry (top & bottom), including the kitchen sink were all torn out and disposed of. That plastic-tarp covered stove is all that remains of the summer kitchen.

The guys will come back again tomorrow to remove all the plastic sheets and refuse.

We now have a mold-free basement that is unfinished - it does have all the framing intact so it won't cost as much to finish the walls. Methinks we might give a stab at putting up drywall ourselves (and by this, I really mean I would supervise while hubby supplies the muscles).
Posted by popcorn at 7:06 PM No comments:
Newer Posts Older Posts Home
Subscribe to: Posts (Atom)