... my Medela PISA's pump just gave out.
I called their customer service and they'll be sending me a replacement on Monday, I should receive it by Tuesday.
I pump out 48 to 60 oz of breastmilk a day and thinking about spending the next 3 days without a usable pump (it works intermittently, sometimes it would run and sometimes it wouldn't) is making me really really nervous.
I'm thinking I should go out and buy a cheaper electric pump for the next few days but it's such a waste! I have a Medela manual pump but going manual for 48 oz ? I'm so not looking forward to that. Thankfully, weekend naman so hubby can take over baby duties while I pump.
Posted by popcorn at 1:30 PM 1 comment:

We recently ordered a glider & ottoman for rocking and soothing the baby to sleep. It arrived a couple of weeks ago and we were able to set it up in the master's bedroom last week.
When we opened the box up, the glider was in several pieces which you have to screw together and the cushions had to be tied and others buttoned to the frame in order to attach it to the body. I had asked hubby to assemble the glider while I tended to Swe cha, some odd minutes later, I went to the other room and saw hubby holding the plastic-wrapped cushions. He looked at me and raised his eyebrows. "I guess you don't want me to tear off the plastic, eh ?" he asked.
If I could blush, I would've blushed.
You see, I am my parents' daughter. We have this propensity for preserving the newness of our things and hate to take the plastic off. In fact, when I was a child, I still remember picking the plastic wrappings off of the interior car door of our vehicle, note that the car was at least 5 years old by then. That was Dad's preference, I remember him berating me for tearing bits of plastic off, maluluma raw the car.
Mom's 4 year old laptop still has that clear plastic screen protector stuck to the screen and to the exterior of the laptop. She prides herself on how new her laptop still looks after 4 years. Pretty useless if you ask me because she's now shopping for a new one. So, who's going to enjoy her "brand-new-looking-old-laptop" now ? Sayang lang all those years she spent peering through the plastic because it messed up her view of the screen. Her portable DVD player ? Yep, still has that plastic on the screen intact.
As I was saying, I inherited this gene from both parents - sort of - and in my case, I tend to go gung-ho on slip covers.
My dining room chairs have slip covers - but time and time again, I've proven that this is sulit during those times when hubby and I have spilled or dropped soy sauce / seasoning, HA! My mattresses have mattress protectors and the baby's bed have water proof mattress savers,...
So anyway.. back to the glider. My concern this time was we got it primarily for baby-related use and our little one spits up every now and then. He's wreaked havoc on our wall to wall carpeting which we plan to replace with hardwood as soon as I am employed (or maybe not as we've learned to protect the carpet with rugs and towels and staying on the protected areas during feedings) and as the glider cushions aren't washable, I'd hate for baby to throw up on them.
The solution ? Slip covers. I looked around and found out that slipcovers cost at least half of the glider and sometimes, as much as the glider itself (and I couldn't find one that fits my exact glider) . With that, I decided to make my own. I rummaged around for this sturdy fabric that I have lying around, I got it years ago at a rag shop and I just knew that I was going to find a use for it.
I bring out my toy $12 sewing machine again, handed hubby the baby and got to working. In an hour, I had accomplished this: 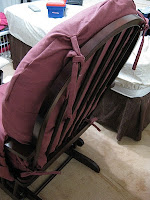 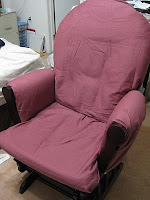 It's not perfect and obviously home-made but it's the best I could do in that much time (with a baby in the house, you don't have that much time to spend on frivolous activities) and without the proper training and supplies (patterns, fabric markers, matching threads, a real sewing machine, etc). 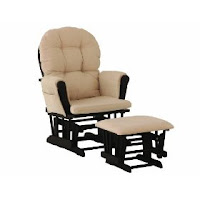 This was how it looked like without the slipcovers, note that the picture shows black wood, ours is in cherry.
My verdict ? Pwede na :) and if I could do so, I would've patted myself on the back. Good job, no ?
Posted by popcorn at 7:39 PM 1 comment:
Labels: DIY

A little bit of good news

I heard back from that company - the one I sent a resume to last January.
The contact asked for my salary requirements. I hesitated a little bit and tried to do some research in terms of industry standards but it was really difficult to come up with a number. The salaries that I see on websites and forums vary a lot and covers a really wide range and without knowing exactly what the job description and responsibilities are, it was quite a task!
I did the best thing that I could think of. I figured it was only fair that I get at least the same compensation that I got from my previous job because after all, my salary back there was within industry standards (though a bit on the low end, I think). Then I figured that it was only fair that I try for a little bit more , after all, who doesn't like bonuses or salary increases ?
So I gave a number.
Guy comes back and says that he thinks it is not going to be doable but that it doesn't hurt to ask so he'll forward my request.
Now, I'm torn. Part of me is anxious that I might have asked for too much, I hope this doesn't sour them on me. On the other hand, I'm thinking that if I had asked for a lower salary and guy came back immediately and accepted it, I'd feel so bad that I devalued myself and gave myself away at such a bargain. Bahala na. For now, I'm treating this as good news as this means that there is still interest.
In any case, I'm praying that the position will be available for me at the right time and that I will be able to find a good day care or caretaker for Swe Cha by then and that I will have fair compensation and that I wouldn't be forced into anything by our circumstances.
Do I also dare hope and pray that I will be offered a position in the salary range that I requested ? Or is that too much to ask ? I'll leave this in God's hands na.
Posted by popcorn at 6:19 PM 3 comments:

I finished filing our taxes today - finally. Been working on them for a few days, it's not usually this hard but I squeeze it in in between Swe-cha's feedings and he does have a tendency to wake up from his naps CRYING. So in my rush to tend to the baby, I keep forgetting to save my work and I end up have to enter the data in again.
Anyhow, hubby and I discovered that having a baby for an additional deduction does not amount to a lot. Oh well :P In any case, we did get a few $ worth because Swe cha was born in 2009 so we got a whole year's deduction out of the 1 week that he had (out of my tummy) in 2009. Yay!
Finance-wise, I've been itching to get some sort of savings or investment account started for Swe-cha's college fund. I still have not decided between getting a regular 529 account or a ROTH IRA (which can both be used for retirement or higher education). Being unemployed does not leave me with a lot of extra funds for savings but I figure that we can start with the refund that we get from the IRS. I've also been keeping track of the ang-pao (red envelopes with money) that he received as gifts during Christmas, I'll be adding that to his college fund, when he does get one, as well.
Any suggestions on which one to go with ?
Posted by popcorn at 6:25 PM 3 comments: 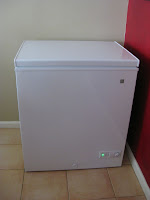 The freezer is here.
I've wiped the inside clean and plugged the freezer in and am just waiting for the temperature inside to stabilize - will probably wait a couple to several hours - and then will start transferring the frozen breastmilk from our refrigerator's freezer to this chest freezer.
It's really a cute cute thing, a little bit wider than a full load washing machine. When the delivery guys unpacked it, my first thought was "it's too small, should we have gone for the 7 cu ft freezer ?" But then again, small as this is, it's already pushing our dining table further into the living room area so this is the perfect size for our house.
I just hope that it's enough for Swe-cha's milk stash.
On that note, I'd really like to reiterate how happy I am that I am able to breastfeed my baby. Not only does breastmilk provide good nutrition for Swe-cha, it's been helping me burn lots of calories too and that equates to weight loss, yay! I am beginning to dread the time when I will be weaning my baby off of my milk, I will have to go on a rigid fitness regimen by then and plan my meals property - say, get p90x meals from Beachbody - in order to lose more if I still need to or maybe just to maintain my weight at the ideal level. In any case, that won't be for several months at least so I'm not worried yet.
---
Shoutout: Hi Meekerz, if you read this post, help naman, can you repost that Fisher price high chair link that you left me ? or leave me the name of the model of the high chair ? I tried the link that you left but it only brings me to the site's main page and not to the high chair's page.
Thanks!
Posted by popcorn at 6:20 PM 1 comment:
Newer Posts Older Posts Home
Subscribe to: Posts (Atom)