So the internet has been buzzing about Manny Pacquiao's statement about the LGBT community.

All sorts of people have given their opinions and syempre, may comments rin ako:

- Some people say that Manny is a hero, he's done so much for our country and he's even bled for our country - napaka super duper OVER naman nito. Yes, he excelled in his sport and has given our people so much to be proud of. Pero di naman tama na i-compare siya sa mga servicemen whose lives are on the line every day.

Boxing is Manny's sport / livelihood, it's not a service to his community/countrymen.

He is NOT a hero.

- In fairness to Manny Pacquiao, I have to admire his commitment. He apologized for his words but he remained committed to being against same-sex marriage. He's surely lost a lot of votes already, he even got dropped as an endorser by Nike, but he remains steadfast in his resolve. 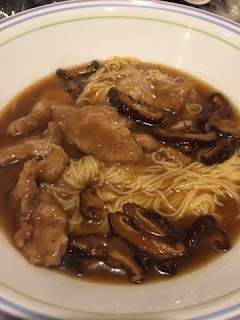 I've been craving Maki-Mi for the longest time but we can't seem to find any restaurants in our area which has it - I don't remember seeing it in any of the Chinatown (NYC) shops either. My Aunt in CA makes it and so does my bro-in-law (in CA too) but I've never gotten the chance to ask them how to make it.

Today, the stars came into alignment. I had extra lomo (pork tenderloin) left over from a dish I made a couple of days ago. I wanted something maasim and got a pack of sinigang mix from the Asian store. Then, thinking that it is also Chinese New Year, I went back and got black vinegar too. The black vinegar really pulled everything together and made me think maki-mi.

I started browsing through the net to look for some interesting recipes. The actual cooking process took me a bit longer than usual so we didn't get to sit down for dinner till around 9:30p or just past that but this was so worth the wait.

Honestly, na surprise rin ako that it turned out great. Somewhere in the middle of the process, I tasted my maki soup and medyo nagduda ako and started worrying that I was wasting food.

*pats myself on the back*
Posted by popcorn at 10:36 PM No comments:
Newer Posts Older Posts Home
Subscribe to: Posts (Atom)