While scooping some ice for my drinking water...

Swe-cha: (points to the scoop) shovel

Me: It's okay, I'm not going to talk to you anymore if you don't want to listen to me anyway.

Posted by popcorn at 6:32 PM No comments:

We spent part of our weekend at Six Flags Great Adventure (yes, again). As we were walking back, Swe-cha started dragging his feet.

Ayun pala, he saw Tweety and Sylvester at the Six Flags Characters meet-and-greet area. He said he wanted to get a hug. Thankfully, kalalabas pa lang yata because the line was short.

When it was our turn, I braced myself for carrying Swe-cha again (I had to do that last December at Disney else he'd run) but he was really good. He didn't need me at all. He ran to Tweety, gave a hug and got hugged, he then looked at Daddy, posed and said "Cheese!".

Then, when we were done taking pictures with Tweety and I tried to get him, he ran back to stand next to Sylvester. Onga naman.

Swe-cha's school is having their field day today.

Yesterday evening, I opened Swe-cha's homework folder and found instructions for field day. It listed a bunch of items:
- Wear sneakers and a shirt in your team's color - YELLOW
- blanket that can be put on the ground to sit on
- 2 bottles of drinking water with name written on it
Label and place all items in a drawstring bag.

I rummaged in Swe-cha's closet and could not find anything in yellow so I had to call his Dad and he found a yellow shirt at TJ Maxx's on his way home.

I also could not find a drawstring bag until I remembered getting one as a loot bag during a training I attended earlier this year.

I sure wish that teachers / schools would give out instructions like these at least 2 days before the event to give parents a chance to prepare, especially if there are very specific requests.

Posted by popcorn at 7:35 AM No comments:

It's such a treat to have a neighbor come knocking at the door and offer to mow our yard for $20.

$20 seems like a reasonable price. I was so happy, ni hindi ko na tinawaran, I just said yes and asked him if he was willing to come do ours every other week - okay lang rin!

The husband is so lucky, he gets a break from yardwork this season.

Swe-cha's class went on a field trip to Turtle Back Zoo today.

Me: Did you see lions?
Swe-cha: Yes

Me: What did the lions say ?
Swe-cha: Hello, roar!

Me: Did you feed the goats ?
Swe-cha: Yes

Me: Did you ride the train ?
Swe-cha: Yes 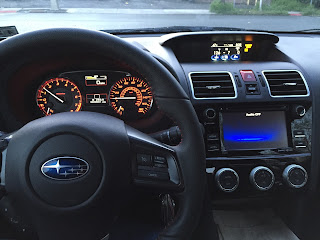 I took the husband's new car out for a ride this afternoon.

Someone told me that this car adds pogi points, you'll look more "gwapo" when you drive one.

Me ? I didn't feel gwapo (nor pretty) but rather, I felt young. I don't know if it's because it had a manual transmission and driving stick-shift brings back my earliest driving moments or maybe it's high-tech gauges and graphics in the console, all I know is that it made me feel younger.

So all this stuff I've heard about guys going through a middle-age crisis and getting themselves sportcars? I get it too. 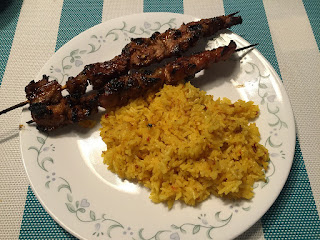 We had perfect grilling weather today and by that, we really mean that the day was slightly cloudy with just the barest hint of a chill in the wind.

I've had these pork skewers marinading since Friday night and by today, they were very flavorful already. Definitely the best bbq I've made so far, according to hubby, at par or even better than the ones we buy at restaurants.

I don't usually get involved with politics. I'm interested and like to join discussions (mostly to expand my knowledge of current events) but when things start getting heated, atras na ako.

Schoolmate 1 posted that she was angry because

"A strong solid 14.9M people who voted for Duterte WILL NEVER vote an LP for VP. That is as good as not wanting Duterte for President at all. So where did Leni's numbers came from? If you will eliminate cheating employed on this result her true standing will either be behind Chiz Escudero (who happens to be more popular and known than her) or ahead of him by a small margin. Similar to Mar and Grace numbers. Sobrang obvious! Saan mo hinugot ang numero mo Leni?"

I left a comment that said plenty of people I know voted for candidates from different parties, myself included. Why would people who voted for Duterte not vote Robredo ?

The response was "It's okay if you're a Robredo supporter, my spouse likes her too."

It wasn't really an answer but I didn't pursue it. I had the feeling that we'd end up nowhere.

At this point, I still haven't learned my lesson so I left a message asking "why does it not make sense for Duterte supporters to vote for Leni ? bakit raw ? "

and then there is Sandro Marcos who claimed that there is dayaan kasi raw bakit iba nang total # of votes for President compared to the total # of votes ng VP. Then later, aamin rin siya that he was one of those people whose vote for president got invalidated because he made a mistake with the form.

Had the most awful nightmares last night.

Swe-cha couldn't sleep on his own due to his cold and moved to sleep beside me on the big bed. He kept tossing and turning and essentially  kept me awake most of the night.

Despite waking up several times during the night, I'd go right back to a similar-themed nightmare as soon as I fell asleep - someone keeps kidnapping Swe-cha!

The first few nightmares, we were able to recover him.

We have not been able to find him yet when I woke up from my last one this morning. At one point, I remember feeling very depressed, I just wanted to die and I planned to do that if we didn't get him back. I remember thinking, I didn't want to live if I didn't have him. 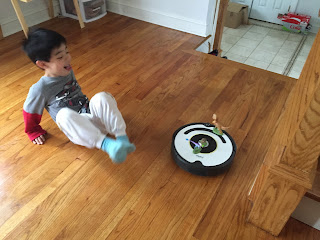 It's nice to see that Roomba is making new friends by giving them a ride.
Posted by popcorn at 12:54 PM No comments:
Newer Posts Older Posts Home
Subscribe to: Posts (Atom)